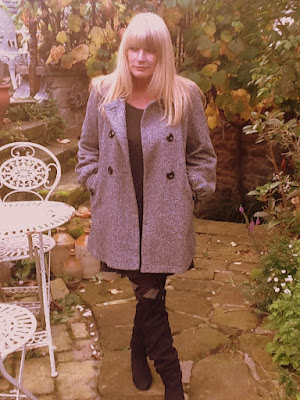 Today I had what is apparently described I am told as a working lunch . In other words discussing some new business ideas over a glass or two of wine . We happened to be near Meadowhall
and I made the mistake of going in . Two hours later I emerged with aching feet and in a state of confusion......I'll blame that on the shopping and not the wine. However for my expedition I wore a Dorothy Perkins knitted dress and coat.

So often I see guys so desperate to wear a designer suit that they end up buying a designer label which costs a fortune . The suit doesn't suit them but its fashionable , in fact it often looks like the suit is wearing them. Why be a slave to fashion , why not follow your own style?
Buy a suit which fits you perfectly off the peg , then take some ideas to your local tailor. Have them alter it in your own style. You have your own designer suit for a fraction of the cost.